There comes a time in each mother’s life when she must say goodbye to her child. Sometimes it is an obvious form; they pull out of the driveway with a car loaded with posters, clothes, and college dreams. Or they are whisked away by a new love under the veil of hurdled rice as they begin to make a life together as husband and wife. Or sensing it is the right thing to do, he dresses in uniform and leaves to go defend his country. However, mine was not so obvious of a split. I did say goodbye as he drove away in his truck to experience the big city, then again when the police took him away for a crime he committed to himself. I said a hysterical goodbye when the ambulance turned on the red lights and sped away.

But he returned, thankfully. He is back, but living a life I don’t understand. My roll is to support him, yet not enable. I am to help him with sobriety, but not life. These lines are nearly impossible for a mother to distinguish. This was the child I carried in my body for 9 ½ months, how can I leave him in his time of need? But his recovery almost depends on his mother saying goodbye. Saying he can handle this. Seeing that he has always marched to a different tune, always been different, always lived life on his terms. He can do this, he has the skills. He doesn’t need me or need to worry about me.

He was born of a 7-generation circus performer and a wanderer. His parents are so different, he was never able to explain what we did to his teachers (and we certainly weren’t invited to parents night). He spent the first year of his life on the

road, eating most meals in the front of the truck. His heritage is different, his parents are entrepreneurs. Our home was never a “Beaver” type of place. It makes sense that he is unusual.

I must remember that even his birth was difficult. He refused to turn his head, so he could move thru the birth canal. The doctor moved it in to position, only to have him move it back. This first act of defiance nearly killed both of us. At 18 months, he took to taking the screens off the window and escaping out of the house, so that he and his dog could “be alone.” At three, he got in my car, popped it into gear, and drove away. Standing on the seat squealing with glee as he hit other cars. At four, he began to runaway from the house, and when I caught him and brought him home, I would lock him in his room. He would scream out his top story window to the horrified neighbors below that I was killing him.

He was different from the others, always the entertainmer, the muse, rabble-rouser and dare devil. He drove teachers insane. They lashed out at him and told him he was stupid, not normal. I fought the battle for him, to prove he was special. Ultimately he needs to see for himself just how special, smart, 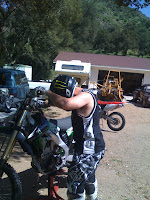 and wonderful he is.

My therapist says that children instinctively know when a parent lets them go. Then they become adults, functioning on their own. He feels the pull to be my son, as much as I feel the pull to mother him. We must leave each other in these rolls, and come back together to have an adult relationship.

I know she is right. I feel the weight of his recovery wearing on my soul. I am becoming angry that he is not filling in that picture I had painted for him. I must see him as he is, living his life on his terms, with no regard for what I want. He will be happy, I may not understand, but his soul will be t

hriving and driving. His Mommy won’t be giving him a ride.

My dear son, I love you, respect you, and wish you a life of happiness, no matter how you chose to spend that life. I am here for you when you need me, but its time for you to fly.