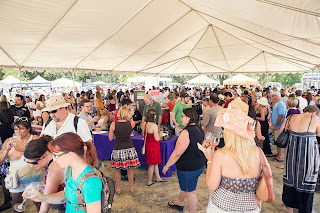 There is no shortage of food and drink events here. In fact, I would say that per capita, we celebrate wine and food more than any other municipality. Every now and then one comes along that is so brilliant, so “I can’t believe no one thought of that before”, smack your palm to your forehead good, that it sells out in three weeks. I attended that function today. This was the inaugural event for Bacon and Barrels.
If I had to reach into the recess of my mind and had to pick one all time favorite food it would be bacon. Bacon and Barrels was beyond all expectations with a full day of food spirits, wine and beer with live music. I was tasked as a Celebrity Judge to award the Jefe del Porko award to the Top Chef and Mixologist of the day for achievement in the bacon arts. 17 restaurants presented food samplings and 6 mixologist prepared the best drink- Tough job, right? My fellow judges were Krista Harris, Editor of Edible Santa Barbara, John Blanchette, a connoisseur travel and food writer, and Keith Saarloos with the The Krush’s Cork Dorks, Adam Montiel and Jeremy West in tow reporting on all the libations and food.
We started with the bacon infused whiskey from Laphroaig as a man with a kilt and a passion for whisky took us through all the steps to create this special drink.  Ingredients included bacon, orange and maple syrup essence, Laphroaig single malt whisky and spiced ginger ale. It was fantastic combo of passion and spirits. We moved on to all 17 of the best eateries including Fresco Valley Café, Sides Hardware and Shoes, Al Fresco Picnic, Succulent, Louise’s Kitchen and Starting Gate Restaurant. 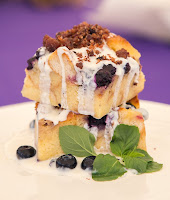 Willows offered the Piggy Wiggly a delectable combination of ceviche style diver scallops topped with pork belly and a strawberry mango salsa. It was elegant and full of flavor. My favorite one so far. Root 246 had a Pork loin diced filled baguette with sautéed onions and a scrumptious sauces. Bob’s Well Bread had the most amazing loaf of artisan sourdough bread. Hiding throughout its doughy belly was chocolate bits and bacon. The Ballard Inn offered a slice of pork belly that had been cured for four months and then smoked for two weeks on a bed of shredded cabbage with delectable cimichurri dressing. Now this was my favorite.  Then we tried Sides Hardware and Shoes (these are the old owners and chef from Mattie’s tavern and they have opened a new place in an old hardware store- thus the name). We started with a salad that had spicy arugula, custom smoked pork belly (in their patented wine barrel smoker) roasted peaches and crusty bread. It was humble, but a mind-blowing accomplishment. Then we had the Sliders that were incendiary. Kobe beef patties with pork belly, sautéed onion marmalade and spicy aioli on a bruschetta bun made this my darling. This judging gig picking out one winner just got difficult.
The Ranch and Reata Roadhouse offered a grown up version of the BLT. Huge Texas toast bread was buttered and grilled, then layered with pork belly, heirloom tomatoes, arugula, and a spicy aioli. But my winner was Full Of Life Flatbread with their pork belly pizza with crispy pork, pistachios, arugula, onions, charred peaches and Gorgonzola cheese with micro greens. This complexity of flavors all cooked in a cave manse stone oven always delights me as it does all others (they had just announced the opening up a second location in Santa Barbara). Owner Clark offered us a Goat leg pizza with sautéed mushrooms, pork belly that was one of the most original and miraculous dishes.
Sweets included caramel dipped in dark chocolate with bacon bits and pecan from Stafford’s Chocolate. Churro ice cream from McConnell’s with large bits of cinnamony churros and a del leche flavor. And the favorite was from Rooney’s, a Bailey’s Irish cream ice wrapped in Jameson infused caramel and then dipped into a dark spicy chocolate.
We stopped at the misting tent to cool off, grab a bottle of water and steel ourselves for the Spirits. It was extremely hot, so the Bathtub Gin that consisted of gin flavors infused in vodka and shaken with lime presented by Root 246 was a crowd preference and also won the judges favorite. However the ice shot glass from Willows with bacon infused Manhattan with drenched cherries was a delectable indulgence. 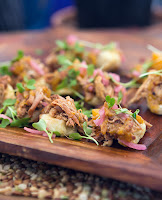 Our last stop was at the VIP tent were Al Fresco Picnic had bacon wrapped jalapeno infused shrimp. They also have glasses of dark chocolate with large bacon pieces for dipping and bacon wrapped dates stuffed with a spicy chorizo. At this point I decided that my stomach was sprained from so much bacon and switched to white wine. That only lasted 30 minutes and I was back sampling Succulent’s braised bacon biscuit.
Here is my advice to you, follow Bacon and Barrels online and buy your tickets the minute they go on sale next year. This event will grow, but that will enhance the experience. I was impressed by the layout, organization and thought that went into each moment of this bacon bacchanal festival.
Bacon & Barrels at Saarloos and Sons is a festival dedicated to bacon. The Central Coast’s best chefs concoct and served brilliant bacon dishes to passionate bacon lovers.  Liquor sponsors provided cocktails, beer and wine designed to complement a bacon meal. Bacontrepreneurs and bacon-friendly brands exhibited their wares and connected with the bacon community, including a piggy petting zoo. This is a fundraiser for the Santa Ynez Valley Visitors Association, in partnership with Create Promotions. More information at www.baconandbarrels.com.
Photo credits to Jeremy Ball/Bottle Branding
Tags: Culinary Tourism