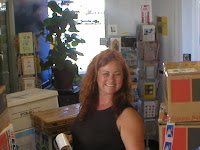 I own a small business. Translated,that means it makes no money. It is a Mail and Parcel store, so everything I sell, you can get somewhere else cheaper. We keep the doors open by offering Extremely Good Customer Service.

We have resolved ourselves to the fact the business exists only for:
1. To keep me entertained with the Pismo Beach native happenings.
2. Keep my children employed.
3. To house my husbands business, keeping his office expenses down.
4. The doggie treats and toy box for kids (every child gets a toy and every dog a treat). I get a chance to oodle them both.

There is no profit, nor has there been since I bought it in 2000. But I enjoy it and as long as it doesn’t cost me money, we will keep it.

Sometimes the frustration factor of dealing with the business outweighs the small benefits.

Like when my employees all called in “stoned” for 4/20 (a national stoner holiday) so I was forced to deal with cranky non-stoned people all day.
UPS claims drive me nearly insane. Some guy brings in a box full of liquor (that he packed with one hand towel) insures it for $300. The UPS man juggled it and dropped it all the way to Arizona and when the potent liquid came oozing out, threw the whole thing away. It is illegal to ship alcohol. Now this man wants his $300 insurance. I try calmly to explain that he could have a SWAT visit from the ATF if he persists, but he doesn’t care, he wants his money.

I had a man sue me once for $40.00 (the filing costs him $30.00) because I was mean to him. I hauled my ass to court with 200 pages of facts, only to have the judge rule in his favor, because he didn’t feel businesses like mine should exist. What??

Now I am in a heated battle with the bank. They are idiots, Worldwide idiots who bought the small local bank that is next door to me. Same employees, who I call my friends, but with new BIG bank rules. They changed the rules and do not show you what is posting (being taken from the account)until midnight. But you only have to 7:00 pm to deposit money. In a normal world I would know what is presenting, but I don’t live in a normal world and have 8 different shipping companies dipping into my account daily.

I thought I had put in place overdraft protection, but they are not honoring it. Bottom line, they have over $300 of my hard earned money in Overdraft charges. So I called the man I was told was the only one who could erase these ridiculous fees. Mid conversation, I realized that I had just told on my friends next door to their boss. I tried to back peddle and tell him I only called to have the charges reversed. He wanted a full report on his employees.
SHIT! SHIT! SHIT!
I cried and begged him not to call and “discuss me” with my friends (who are powerless and trying like crazy to help). I hate snitches now I was one.
SHIT! SHIT! SHIT! 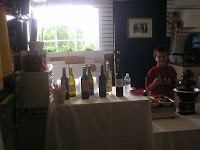 Today is not a good day to own a small business. I am going to start selling liquor to elementary schools.