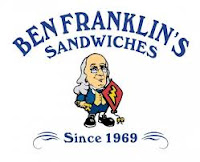 The word sandwich was born in London during the very late hours of the night in 1762 when an English nobleman, John Montagu (1718-1792), the Fourth Earl of Sandwich, was too busy gambling to stop for a meal even though he was hungry. The legend goes that he ordered a waiter to bring him roast-beef between two slices of bread, so he wouldn’t get his fingers greasy while he was playing cards. A less than noble start for what is today a staple for lunch most everyday.
Since 1969 a sandwich maven has existed at the Y on Higuera Street in San Luis Obispo. Ben Franklin’s Sandwich Company not only boasts the cool Purple Dragon, Ben’s is the place were the small sandwich is seven inches long, medium is fourteen inches and the large is twenty one inches, so it is my advice is to go big or go home. With a plethora of noble sandwiches, salads, soups and homemade chili to choose from this is colorful building filled with helpful, friendly employees is my favorite place for fast food. 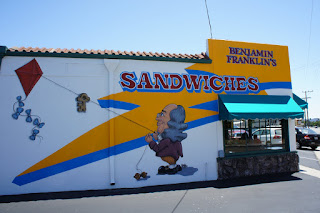 Originally called Ben Franklin’s Electric House, this local favorite has been serving San Luis traditional submarine style deli sandwiches with a wide selection of high quality meats and cheeses on fresh, locally baked white or whole wheat rolls from Farb’s Bakery (which they pick up daily).
I originally found them for a breakfast sandwich that was as tasty as it was big. Fluffy scrambled egg, bacon and cheese all resting on a hot from the oven (and so soft) French roll, it was the best breakfast treat I had had and made me swear never to eat a fast food replication of this delightful and filling sandwich.
I went with friends for lunch and ordered sandwiches that made the whole party contented. I started with Ben’s ATC (avocado, turkey and cheese) on billowy soft white bread loaf. The turkey was sliced thin and piled thick, the fresh avocado and crème cheese mixture was tasty and I chose Swiss cheese and The Works that included: olive oil and red wine vinegar dressing, mayonnaise, Dijon mustard, sliced tomatoes, dill pickles, onions, shredded iceberg lettuce, and a dash of black pepper. Priced similar to the wretched Chain that I avoid like a torpedo (Subway), this should be where everyone goes to purchase their hoagies.
You forget just how good a sandwich can be until you have had it on freshly baked bread. It is no secret that I am a colossal fan of Farb’s Wholesale Bakery. I can always spot their bread on the first bite. Only the finest restaurants carry their bread and I find them and point them out for the world to enjoy. They supply white and whole wheat loaves to Ben Franklin’s, and it is the simplicity and freshness that makes them virtuous.

My friends ordered the Ben’s Californian with sliced, moist roast beef, pepper jack cheese, green chilies, pepperoncini peppers and oil-vinegar dressing, that was heated for a “Frankly” tasty sandwich.  The hippy girl ordered the Vegetable Mix that was heaping with fresh tomatoes, onions, olives, bell peppers, cucumbers, green chilies, mushrooms, pickles, pepperoncini’s and alfalfa sprouts. She added avocado and cream cheese mix, and declared it the best. We shared the homemade chili with kidney beans, chunks of beef and superb secret spices.
We came back the next day for sandwiches in route to wine tasting. Gary filled our bag with homemade Rice Krispy bars, brownies and cookies that kept a smile on his face the whole day. We took a Cold Italian sub with sliced ham, Cotto salami and pepperoni with provolone cheese, it was filled with meat and Gary asked them to leave the rabbit food (lettuce) off, which for the male palate, equaled success. I had a Club San with a juicy turkey breast, two strips of crispy bacon and tomatoes piled high on my favorite white loaf.
Ben Franklin’s Sandwiches is located at 313 Higuera Street
in San Luis Obispo, call them at (805) 544-4948. They are open Monday through Saturday from 9:00 am to 6:00 pm and
Sunday from 10:00 am to 5:00 pm. This is a place where good food happens fast. No reason to ever go anywhere else for a sandwich.
Tags: Culinary Tourism