In my culinary adventures I have accepted that the look of a restaurant doesn’t always reflect on the food. Some of the best things I have tried were from street vendors. The duck soup in Thailand, the curry pies in Grenada and the tacos in Mexico. On my latest “stay-cation” I traveled to the village of Cambria. Our first stop was for lunch and as I pulled into the industrial part of town littered with broken cars and dented doors, I was hesitant to get out of the car and go to my destination. But my husband reminded me of my credo and my responsibility to squirrel out the best food no matter what the outside looked like.

We found Boni’s Taco’s is a small restaurant tucked away behind a jasmine plant. With only 4 seats outside, most of the food was to go. When I arrived, there was a line and it never went away.  Boni (pronounced, bone-ee) and his wife have owned and operated the taco stand for over 11 years with the help of other family members and customers and staff that have become family. As we waited, a family from Australia arrived; they were freshly off the plane and had to go back to their Air B&B to get American dollars, because cash is king at Boni’s.  They returned and we helped them decipherer the menu.  Their first taco was an extraordinary event for all of us.

The house special is Al Pastor, a favorite of mine. Al Pastor is pork, marinated in Boni’s secret red sauce, then cooked on a vertical rotisserie to a crispy perfection. The other meat choices were Carne Asada, which is hand cut beef seasoned with authentic spices and expertly grilled until tender and succulent.  The Pollo is fresh, never frozen, chicken breast, slow cooked in a delicious chipotle sauce. And finally the Chile Verde, a tender pork, lightly fried until golden brown, then slowly simmered in a savory green sauce with special spices. 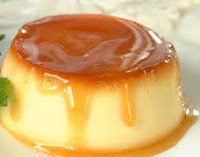 Gary started with the Flan, a traditional custard dessert covered in a rich caramel sauce. He claimed it to be the best one he had ever tried and ordered another so we could get a bite.  I ordered one taco of Al Pastor and one Sopes or Huaraches.  The Sopes is a thick handmade tortilla (more like an English muffin) that is layered with beans, shredded lettuce, sour cream, cotija cheese and the Salsa Roja.  All the salsas are made by Boni and the subtle flavors shown through. The Sope was crispy yet pliable and I was in heaven. They Al Pastor was emanating with authentic flavor and I know understood why there was still a line to get this food.
The burritos were shown in three sizes, the largest one as big as my head. My producer ordered that and she was in heaven.  This girl is a burrito expert (I swear that is all she eats) and the chile verde with beans, rice, cilantro, sour cream, cotija cheese and the Salsa Morita, this was the flawless example of an exceptional burrito.  A Mexican coke was the perfect accompanist to this wonderful meal.
Boni and his wife came to talk with us and told us that everything is 100% authenticity created there. The dishes are made from recipes that have been passed down from generation to generation, leading back to their roots in Taxco, Guerrero. Boni emigrated from Mexico in 1972, then in 1989, he and his wife laid new roots in Cambria. Boni and his family have been living in Cambria since and founded Boni’s Tacos in 2004.  He is a cabinetmaker in his spare time and a culinary delight at this wonderful little taco shack. 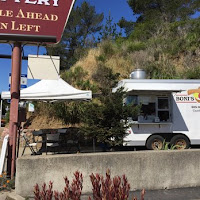