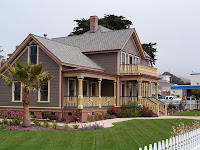 Okay- so one of my professions is writing about restaurants. I have been doing this for six years. That translates to over 300 restaurants. Finding new adjectives’ for delicious, wonderful, and fresh is my weekly blight. Some times, I have to eat at three shitty restaurants to get one good one to recommend to my readers. However, some restaurants are SO FUCKING GOOD- that in my spare time I cannot NOT write about the meal. Moreover, in my papers, I can’t say FUCK and it feels good just to type it. This week, I took time out to write about the Cass House in Cayucos, just for the memory or reliving a fantastic meal.

I have eaten at the Cass House many times; reviewed them at least twice, I’ve blogged about them, talk about them on the radio, did a video of their anniversary, it is no secret I worship them, but they out did even my expectations. It is hard to describe the food (except for this is what heaven must taste like), as it is complicated, yet simple. In season and yet taste of influences from all over the world. You can discriminate every element of the dishes, even if it is a two-pronged sprig of mustard greens.

The ornament of a house is the friend who frequent it, said Ralph Waldo Emerson. I say that if a house consists of miraculous food it will always have friends. Such is the case of the Cass House Restaurant. This is a beautifully restored Bed and Breakfast with the élite chef, Jensen Lorenzen, manning the helm of the kitchen and hearth. We took our friends who have wanted to join us in this culinary adventure since we started waxing poetically about this restaurant. The waiter suggested we should try everything on the menu as they offer meals in three or four course options. I must say, this is the most creative, brave menu around made by a Chef that posses colossal talents. He artfully brings together flavors that dazzle and delight the senses. Even the names of the dishes were inventive and promised culinary delights. We tried everything except the soup and one salad— and all with wine parings. We rolled out chockfull of pleasure.

We started with a bubble treat of a Spanish Cuvee, with an amuse bush (for those not foodies, it means a first “one bite treat”, loaded with flavor it opens up your tastes buds). A puff pastry filled with Spanish blue cheese, smoked duck breast, and a sprig of micro greens. This was an explosion of flavor and would open up even a smoker’s palette. Next, we had six Humboldt Bay Kamamoto Oysters, freshly plucked from the sea and oozing with flavor. These babies were so noble that I cut my lip sucking them out of the shell. We covered them with a ponzo granita and a satsuma mignonette .The sauce was so virtuous the boys kept it for bread dip.

Next dish was Veal Marrow and Toast- Yeah–just the big leg bone from a cow with the marrow inside cooked down to a consistence of gravy, spread on a hard toast with three different kinds of salt. A black salt from Maui, a red salt from Kona, and a Polynesian white sea salt. The sprinkling of the salt did make a difference in the flavor and it was so good the Boys were sucking the marrow out of the bones to get every morsel. Next was a dish of braised pig trotters. Succulent and superior, it tasted like the best pulled pork, only richer. We had a platter of four different cheeses, all mouth plummeting worthy with the wine.

We ate every bite, drank every pairing, and reveled in the gluttony of it all. We were the happiest diners on the planet. Then he brought desert.

And…… angel food cake with strawberry sorbet, and crème fraiche.

We ate for over 4 hours. The setting was serene, the staff fantastic, the food, none better in the world, I would take any bet on that. It was heaven; I don’t want to ever eat again for fear of cheating on this amazing chef. Nothing was made anywhere else. Everything that came out of the kitchen was prepared there. All the sauces, dishes, even desserts were done on premise. He must not sleep and prep 24/7.

If you live on the Central Coast, you owe it yourself to try the Cass House. We walked down the pier to stave off undulating home. Here is the thing; the price point is not that high. One of the local specials was $35 for three amazing dishes on Monday nights. You can afford it.

The Cass House is still my go-to place if you want a memorable meal that will never disappoint. I would try anything that Chef Jensen creates, I literally idolize this man, and he is my Brad Pitt of the culinary world (that makes his wife Grace, my Angelina). The Cass House Restaurant is in Cayucos at 222 North Ocean and is open everyday but Tuesday and Wednesday. More information can be found at www.casshouseinn.com or by calling (805) 995-3669.

Rant done. Bottom line, it was so FUCKING good, my fingers would not write about anything else today.

The Gardens Of Avila