Today is the day Gary gets to take something off his bucket list. A hot towel shave with a straight edge razor. Looks to me like the woman is going to cut off his head, but he wants it, so I am glad his life insurance is up to date.

I walked over to the Chagall Museum while he is being mollycoddled. Although I own two pieces of his work, upon laying eyes on my sparkly shoes, the sales dude decides I am not worthy and is snotty. Insulting even. Stupid asshole. With a bad haircut and cheap suit. I tattled. I had experienced evil. No one should ever feel ashamed of who they are, no one should ever inflict that on them. I moved on to Saks Fifth Avenue. They are always nice at Saks.

In my little corner of the world, the shopping is either Wal-Mart or Goodwill. We have no Malls, no fancy stores, just surf shops. I am a bit taken when I walk in Saks and see whole departments dedicated to designer purses. Like stalls at the flea market, they are lined up with pretty salespeople with accents trying to tell you why you must have this $3000 Prada bag.

I listened to each one and was surprised how kind and un-judgmental they were. I clearly wasn’t wearing designer clothes and my sparkly shoes made a statement, just not an opulent one. But beach bums like me come to this store once a year to buy a whole wardrobe and they were pleased that they were nice to me as they do work on commission.

I made a comrade at the Lancôme makeup counter, as I have to order my façade material on-line and needed someone who knew makeup to be my guide. She told me of new items, gave me free samples and put me on her mailing list. We chatted and giggled and became wanton friends. Thank you -Regina Chappell you are a cosmetics genius. 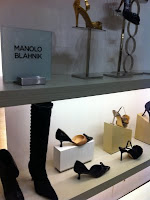 I moved downstairs to the shoe department and that is when my heart stopped beating. What is it with woman and shoes? I am a flip-flop girl through and through, but in the shiny presence of Jimmy Choo, Manolo Blahnik, Valentino, Chanel; I nearly fainted. I took pictures of the shoes and texted them to my daughter. I held them like golden chalices. I filled my closet with impossible to wear shoes that will probably only rest on my husbands shoulders.

My Husband joined me with his shiny new face (throat in tact) and we waltzed into Tiffany’s. I have never received a little blue box. My daughter has. I was determined to buy myself one. I was immediately attracted to a shimmering set of earrings. Only $85,000. Then I looked at a giant pink stone choker and my hunny asked what kind of stone it was. I guessed a Zirconia and Mr. Belvedere salesman spit. Like choking on lemonade. “Miss, let me assure you that Tiffany does not sell fakes. This is a Pink Safire, very rare, I am sure you could not afford it”.

WTF? The funny thing is that these sales people cannot afford this stuff, what gives them the right to be cruel? Bottom line, I will never get a blue box.

We moved over the bridge to Berkley to a snappy beatnik hotel called The Durant. Each room was named for a famous Berkley-hippy and the Do Not Disturb sign on the door was a sock. There were burnt bras in the lobby and images of people running naked in the bathrooms. Small rooms with huge TV’s and one block from campus and the famous Telegraph Street.

We ate in the Hotel Restaurant/Bar Henry’s who boasted a new chef. Gary started with the Bourbon bread pudding, bourbon sauce, and butter pecan ice cream. Though this act shocked the waiter, the dessert was great. (Really, you live and work in Berkeley and some dude insisting on dessert first puts you over the edge? Maybe you should eat some mushrooms). With that thought, we tried the garlic Parmesan foraged mushrooms. They were Marin county mushrooms, grilled with garlic and Parmesan, resting in a Meyer lemon aioli and were both musty and fresh (but not magic). I had to try the caramelized brussel spouts. Who does that? Incredible with a calabrian chili, Parmesan and vegetable sugo (which is a long cooked Italian pasta). Surprise of the night.

Gary then ordered the “angry” mac & cheese. It is angry, cause it is hot.

It was a delicious comfort food with a four cheese sauce, Sambal Oeleck, crushed tomato and scallions. Gary added house made bacon and we saw the bottom of the bowl. I had the chicken and waffles, which were done differently with 2 organic chicken breasts, dipped in buttermilk and fried. They relaxed on 2 Belgian waffles with a Vermont maple cream. The accompanying apple cider braised collard greens where tasty.

Top Restaurants on The Central Coast of California 2019