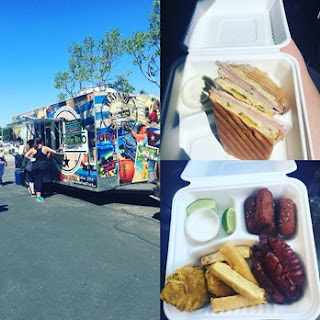 The food truck phenomenon has hit the precipice of astonishing and inspiring food, and we have some of the finest examples right here on our coast.  I chase these culinary coaches of goodness around like I am searching for gold. For it is in the traveling kitchen that you find the master chefs doing something so veracious, and delightful that customers are willing to chase them down to sample their feasts. Food trucks do not have one address to hunt and find, but a different one each day.  It is a culinary scavenger hunt and I love it. My newest find came in a brightly colored one parked out in front of MindBody Company in San Luis Obispo. Cubanissimo Food Truck is the brainchild of Arqui Trenado who is living the American dream. He is a Cuban immigrant who along with his wife, Chrystal has brought some of the best regional cuisine of the forbidden Isle of Cuba to our shores.
It was the Hubs birthday and in a quest to find good food in a new setting, I found the Cubanissimo Food Truck.  Cuban food has always been a favorite of mine, but this was his first try.  Arqui prepares everything from Cuban sandwiches to Ropa Vieja to Chuleta plates and serves only Cuban beverages. We ordered the Cuban sandwich, Tostones with
Black Beans over Rice and Yucca fries. Though the meal was consumed on a black top and served in a plastic tray, it was a birthday highlight (after 5-pounds of See’s Candy). 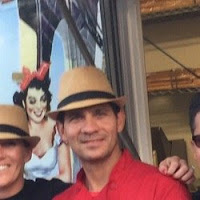 For those who have not had Cuban food, a brief tutorial.  The Cuban sandwich is a rare treat and a star of the between two pieces of bread sect. It must be Cuban bread (which Arqui drives to Los Angeles to get), which has an element of lard added to it making it dense and good for soaking up juices. Inside the sandwich is sliced braised pork shoulder, sliced ham, Swiss cheese, a pickle and mustard.  It is pressed in a heat source (like a Panini maker) so the bread is crisp and the cheese melted. People will argue for hours over the kind of pickle and mustard, and the proper seasoning of the pork, (mojo is my favorite) so every chef’s version is unique.
They are served with Yucca Fries, a delicious break from potato fries.  Yucca (sometimes called Cassava) is a root vegetable similar to the potato, but richer in flavor.  These are fried and served with a garlicky mojo sauce. The Tostones are twice fried plantains, a Caribbean delicacy that I crave. Unlike its imposing cousin, the banana, plantains are savory and delicious. To make these, unripe plantains are sliced lengthwise, fried and then smashed flat, then fried again. Here black beans accompanied them, a simple yet tasty way to wake your taste buds.
I asked Arqui where he learned to cook and he told me it was his father who was his inspiration and maestro in the kitchen. He is planning to expand Cubanissimo’s menu in the near future by adding sweet Cuban coffees. I tried the Jupina Pineapple soda, which was sweet and a refreshing change from soda.

One my next trip I followed them to Santa Maria newest Farmer’s Market on Friday night. Located in the Town Center West across from the mall, I was lucky enough to catch Imperial Rice on the menu. A creamy, seasoned rice with shredded chicken and cheese, simply delectable. Gary had the Ropa Vieja de Pollo, Tropical Fruit Salad and Plantain Chips and then we shared the Cuban Chorizo over Rice with Tostones. It was too much food for one setting, but as leftovers, it was scrumptious.
The Cubanissimo food truck is easy to spot on the street, with its brightly colored images of all things Cuban, such as music, dance and dreams. But following the business on its social media is the best way to know when and where the truck will be and what eats will be featured. Truck locations and daily menus can be found by following Cubanissimo on Facebook or on Instagram @cubanissimofoodtruck.
For those not in the social realm, call toll-free 844-4CUBANO (844-428-2266) or email cubanissimofoodtruck@gmail.com.
Tags: Culinary Tourism