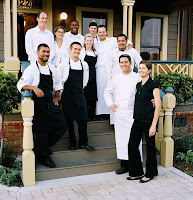 Okay- so one of my jobs is writing about restaurants, finding new adjectives’ for delicious, and wonderful and fresh. I have to do it every week; some times, I have to eat at three shitty restaurants to get one good one to recommend to my readers. But some restaurants are SO FUCKING GOOD- that in my spare time I can’t NOT write about the meal. Plus in my papers, I can’t say FUCK and it feels good just to type it.

I had the most amazing meal last night at the Cass House in Cayucos. I have eaten there many times, reviewed them twice, blogged about them and worshipped them. Last night they out did even my expectations. It is hard to describe the food (except for this is what heaven must taste like) as it is complicated, yet simple. In season and yet influences from all over the world. You can taste every element of the dishes, even if it is a two-pronged sprig of mustard greens. I have reviewed restaurants all over the world and found none better.

We took our friend and Master Tress Architect, Robert. He has been wanting to join us in this culinary adventure since we started waxing poetically about this restaurant. The waiter Daniel- a master wine expert and nicest guy in the world suggested we should try everything on the menu, so we did. Everything except the soup and one salad— and all with wine parings. We rolled out of there full and so happy, I was sure I was going to burst. At the end of the meal, we were talking wine and I showed Daniel my picture of the $700 bottle of wine and he said he would cut off a pinky for a taste of that wine– wrong on that call (see earlier post).

We started with a bubble treat of a Spanish Cuvee, with an amuse bush (for those not foodies, it means a first “one bite treat” so loaded with flavor it opens up your tastes buds). A puff pastry filled with Spanish blue cheese, smoked duck breast, and a sprig of micro greens. This was an explosion of flavor and would open up even a smoker’s palette. Next, we had six Humboldt Bay Kumamoto Oysters, freshly plucked from the sea and oozing with flavor. So delectable that I cut my lip sucking them out of the shell. We put ponzo granita and a Satsuma mignonette on them. The sauce was so succulent the Boys kept it for bre 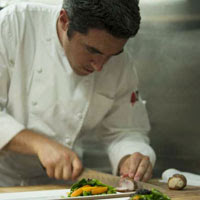 Next dish was Veal Marrow and Toast- Yeah–just the big leg bone from a cow with the marrow inside cooked down to a consistence of gravy, spread on a hard toast with three different kinds of salt. A black salt from Maui, a red salt from Kona and a Polynesian white sea salt. The sprinkling of the salt did make a difference in the flavor and it was so good the Boys were sucking the marrow out of the bones to get every morsel. Next was a dish of braised pig trotters. The superior taste resembled the best pulled pork, only richer. We had a platter of four different cheeses, all mouth plummeting worthy of the Tempornilla that paired with them.
Next, Baranof Island troll caught King Salmon
Chicken Cordon Bleu
Portuguese Fisherman’s stew with chorizo, clams, mussels, and lingcod
Colorado Lamb Loin (done with a West Indian flavor)
Kobe Beef tamarind glazed shoulder
Seared prime strip loins with pomme puree (fancy mashed potatoes) with wild truffles
And Foie Gras and Sonoma Moulard duck. 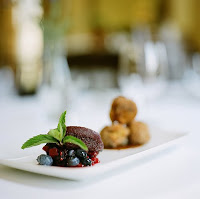 We ate every bite, drank every pairing, and reveled in the gluttony of it all. We were the happiest diners on the planet. Then he brought desert.
Apple bourbon cake
Butterscotch toffee
Chocolate stout milk shake
Mocha pot de crème
Angel food ginger bread pudding with Clementine ice cream
And…… angel food cake with strawberry sorbet, and crème fraiche.

We ate for over 4 hours. The setting was serene, the staff fantastic, the food, none better in the world, I would take any bet on that. It was heaven; I don’t want to ever eat again for fear of cheating on this amazing chef. Nothing was made anywhere else. Everything that came out of the kitchen was prepared there. All the sauces, dishes, even desserts were done on premise. He must not sleep and prep 24/7.

If you live on the Central Coast, you owe it yourself to try the Cass House. Robert agreed and we walked down the pier to stave off undulating home. The crash of the waves and the full moon sealed the point that we had just experienced heaven.

Here’s the thing, the price point is not that high. One of the local specials was $35 for three amazing dishes. You can afford it.

The Book and Author Fair