Tucked deep in the Cannery building is the intimate sushi maven that draws me in when I want adventurous, fresh and full of flavor sushi. Goshi has offerings never seen in other sushi restaurants like sardine, local salmon and halibut. They have Ashi on draught, lychee sake and the Santa Barbara uni is the star of the show.
We called ourselves dolphins and proceed to order nearly everything on the menu, especially if it is unusual. Gary started with his dessert first ordering Mochi ice cream balls (these require a bit of explanation). Mochi is a traditional Japanese New Year’s dish made from soaked glutinous rice, which is pounded with mallets and formed into a sticky cake. Goshi has taken a pasta-thin sheet of mochi and molded it around a core of vanilla ice cream; the dish contains a half-dozen or so oval globes. We loved the textural play between the rich ice cream and the chewy, sticky rice.

The sushi menu has a full complement of sushi, sashimi, hand rolls, and maki, with all of the usual suspects well represented. I ordered the albacore tataki, six thick, buttery, and luscious slices served on a bed of slivers of white radishes, red onions, micro greens and a vinegar, sweet soy sauce (that we poured over a bowl of rice and demolished).
We sampled the Juni Sushi plate that was composed of 12 pieces of succulent and fresh nigri including three different kinds of salmon, yellowtail, roe, striped sea bass, tako and tamago (Gary calls this nigri Japanese French toast). It also came with a spicy scallop roll that was filled with cut scallops and crab, served with a spicy pepper paste and Japanese mayo. It is then topped with masago and fish skin crinkles.

After that it was a nigri parade.  Nigri is a thumb size piece of vinegar rice (sushi means vinegar rice in Japanese) with a slice of raw fish resting on it. Some fish come with a dab of wasabi, a horseradish like root that is made into a paste to stimulate the palate. We ordered the local salmon first and there was only three pieces left, each tasted impeccable. On to the Santa Barbara uni, a sea urchin that challenges even the most advanced penchants, but this possessed the sweetest flavor.

I always try something new and this time it was seared squid with a mint leaf drizzled with a fermented plum sauce. This dish defied my expectations and I dreamt about it that night. We begin to talk about how aquariums make us hungry as we devoured the octopus, ono, sardine and scallops as we watched the chef take the beak out of the squid to serve us. We finished with a Salmon skin roll and a Gobo treat (Gobo is pickled mini carrots and I love them). 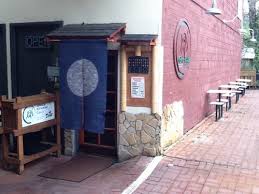 For rolls we tried the spicy albacore with garlic chips, a crunchy exterior yielded to the succulent core, a nice combination of flavors. The peppered tuna roll is a blend of spicy tuna, peppercorn-seared tuna, and avocado, served with ponzu and sesame oil. Both are works of art on the plate and delicious.
Goshi Japanese Restaurant is located at 570 Higuera Street #211:30am to 1:45pm and 5:00pm to 9:45pm every 0 in San Luis Obispo or call them at (805) 543-8942. They are open for lunch from
Tags: Culinary Tourism