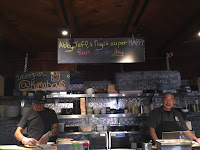 Some restaurateurs instinctively know how to create a culinary tapestry of success. From simple burgers that can cure any hangover to an upscale and fantastic sushi bar and ramen noddle empire, the genius behind Kuma Sushi Rolls and Bowls is Brain England. Brian had a sushi bar in 2004, but he has been focusing on Sylvester’s Burgers. For this new venture, he scanned the county and found two of the best sushi chefs that know fish and how to make a dish so pleasing to the eye it is a work of art. Sushi Chef’s Hidehiko Nogi and Jeff (Razor) Fujiwara have been featured in the best fish palaces and now have combined their talents to dazzle the entire patron’s at Kuma.

I revere sushi, it is my culinary utopia. And to have these masters offering an Omakase (special selection offered by the chef) got my palette watering.

A piece of raw fish is remarkably near the nexus where life suffers death so that it can feed another life. It’s where the circle of life stops and starts, the end beginning.
Razor wanted to make sure I received a full sampling of the menu so I let him pick our menu. We started with a sample of the Ramen Noodles, both pork and chicken. The ramen is cooked in house daily with pure pork. They use all the highest grade, fresh ingredients. The Ramen broth is traditional Japanese broth that is reduced for 24 hours in order to achieve maximum flavor. The Shoyu is the staple pork stock with a soy addition served with egg noodles. I had them add all the extras, garlic chip, shoyu egg, nori, sweet corn and spicy kimchi. The chicken was a flavorful comfort food. Razor presented us with colorful dish of Tuna Poke. Raw tuna is cut and shaped like a rose. Pokē is the Hawaiian verb for “to slice or cut”. This was served with a mango salsa with a bit of cayenne and macadamia nuts, resting on a seaweed salad. It was a delectable combination of flavors. The next dish the Loco Moco was Hawaiian in its influences with a large mound of white rice, resting under 2 slices of Spam, savory gravy, sliced pineapple and a poached egg. My dining companion had never had Spam before and loved this combination of salty, savory, sweet and comfort dish. I would drive here from Pismo just for this delectable grouping.

Out came the next offering, a plate of sushi called the Kuma Omakase that was a work of art. On the huge platter were Nigri’s, Scallops on rice with lemon, salmon roe and tobiko. The lemon was carved into a swan and the wasabi snowman was displaced as most dramatic by celery whittled into a tree. There were two fish favors crafted into a rose was Seared Albacore with onions and raw Ahi Tuna. A roll with local fresh out of the bay halibut and the top had avocado, spicy Sriracha sauce, and pomegranate seeds. Each portion of this blew our minds are we devoured this objet d’art. 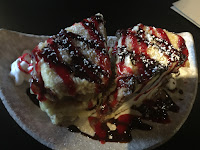 I brought back my husband the next night and Razor presented him with the Kuma Cake as he sat down. This large and equally beautiful dish consisted of chocolate and vanilla ice cream in between a pound cake that is then deep-fried and covered with chocolate, raspberry syrup and topped with powdered sugar. This trip we dipped into the vast sake supply. Sho Chilly Bai served cold and is a 16th century sake, botanical and smooth it paired well with the Shishito Peppers. This time our Kuma Omakase contained a perfect rose constructed out of Hamachi tuna, seared albacore With polar bear roll that had smoked salmon and cream cheese inside and crab and jalapeno slices on the outside. The accruements were a carved radish and statuesque celery.

At Kuma, the service was outstanding and attentive, the sushi chefs both talented, funny and know fish, the food was as picturesque as it was delicious. I am a devotee. Kuma is located at 2011 10th Street in Los Osos, you can call them at   (805) 528-6767,  they are open everyday from 11:00am until 9:00pm.