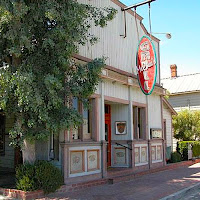 It is an achievement when a chef becomes successful. Those with the right ingredients of talent, hard work and panache not only survive but also thrive.  Chef Ian McPhee of McPhee’s Grill in Templeton is the like a white truffle, rare and wonderful. To be successful and happy after 20 years as a restaurant owner and chef is a rarity. The Chef-Owner attributes his years of success to both the growth of the surrounding wine country, tourism and the loyalty of his local customers. He recalls that when he and his wife, June, first opened in 1994, there were about 20 wineries in the surrounding area. Today more than 250 populate the countryside. Chef told me it was no secret, “I just cook what I like and I am lucky a bunch of people like what I like.” I think he is a modest genius. 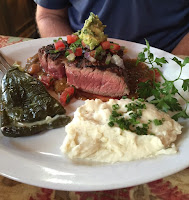 Gary started with the combination of homemade hot fudge sundae with toasted macadamia nuts, delectable French vanilla ice cream and added a warm caramel sauce. He was thrilled with the frozen dish and delectable sauces. I started with the spicy vegetable Crudité and then the oak grilled Ocean Mist Artichoke, steamed then cut in half. It is finished on the grill and served with a chipotle chile mayonnaise and shaved parmesan cheese. This is my favorite way to eat this illusive flower, and I have been known to drive to Templeton from Pismo just for this dish. We then tried a bit of the Mexican Tortilla soup with the lime creama and colorful tortilla ribbons, and we both were elated at how delectable and comforting it tasted. Our next taste was the Chopped Little Gem Caesar salad with roasted red peppers agrodolce served with Mom Herten’s garlic bread.
The salad was unique and scrumptious but that bread was one of the best things I have ever tried. A thick slice of French bread covered in secret sauce and cheese, it was simple, yet astonishingly delightful. We talked about making just a meal out of that and the J Dusi Zinfandel wine. 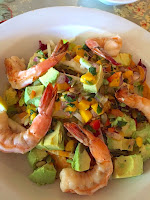 For an entrée I had the 14-ounce rib eye served with three salsas, jalapeno cheese mashed potatoes and a goat cheese stuffed poblano chile. The steak was impeccably grilled and the mashers where so full of flavor, I inhaled them. The chile was the flawless combination of savory and hot, I vowed to add this to my reason to drive to Templeton list. Gary had two starters for his entrée, as our immaculate server, Leslie had down such a succulent job of describing them; he just had to try both. The Kung Fu Baby Back Ribs with their secret Asian BBQ sauce and cold noodle peanut salad were delicious and bold. He went epically crazy for the crispy tempura shrimp. Large shrimp dredged and fried to precision with a spicy peanut dipping sauce and Asian slaw where his favorite of the night.

Chef Ian took me on a tour of his busy 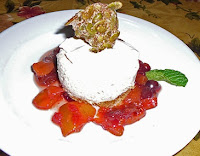 kitchen and was fired up about the new custom-made brick oven that was hand-built by native Italian Giuseppe Crisa at Forno Classico in Santa Barbara, reflecting the Italian tradition of wood-fired Napoletana pizza ovens. Using only local oak for fuel and reaching temperatures up to 1200 degrees Fahrenheit, the oven can cook pizza in less than one minute, which McPhee says, gives the pizza a “lightness” that is not found in slow-cooked pizzas made in a conventional gas oven. The pizza menu includes house creations like the Fig & Pig (fig jam, prosciutto, crispy pork belly, smoked Gouda, and basil) and the R U Nuts (pistachio pesto, basil, Italian sausage, fresh Mozzarella, and Pecorino), in addition to classic pizza styles such as Margherita and Pepperoni. He was also excited about the new Sous-vide (“under vacuum”) machine which creates perfectly cooked meats and veggies buy vacuum sealing them with herbs and spices, immersing them in a “spa” of water thus cooking evenly and deliciously. Chef said he experimented with everything and only rabbit was not enhanced by this method of slow cooking.
“This is not a job to me. It’s part of my life and lifestyle. I am so happy to be here and I love what I do, I’m very lucky,” I asked him if he would ever retire and with the well known twinkle in his eye he told me, “If I don’t show up for work, then I have gone to the big kitchen in the sky.” I wish him 20 more years of success, as this chef is a rare gem.

McPhee’s Grill is located at 416 South Main Street in Templeton; call them at (805) 434-3204. They are open for lunch Monday thru Saturday from 11:30 to 2:00pm and nightly for dinner at 5:00pm. For more information, visit their new website at www.McPheesGrill.com.