The world is a mess and I just need to rule it.

We went to investigate the running water sound. We went out in the back yard

and pouring from the hot water heater closet (which most importantly houses my husbands collection of every watercraft, and dirt bike magazine EVER MADE), was gushing hot water. The water heater had imploded, broke, and seemed destined to not exist. It was the rats fault. They chewed threw the bottom. We cursed the rodents, but really it was my husbands fault, because after both the cats died, he refused to get another. We saved the extraordinary magazines, but determined I would not be bathing at home, for a long while.

Sundays are the most expensive day to call a plumber, but we had no choice. $3300 later with three-week achievement estimation, we nodded our dirty heads in conformity. I am dirty, cold, and pissed. My husband suggested we go dirk bike riding, since I looked and smelled like a pig.

What better time for a trip to find an obelisk of a dirk bike track. We loaded the dog in the Geo and headed for dirt r 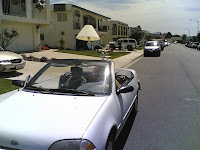 oads, sharp turns, and scary white guys with guns. With the motor head always comes the search for the perfect track. A well-seasoned track in the middle of nowhere with burms, jumps and whoopedees is paradise. We turned at the first dirt road – only to be chased off by a barking dog and gun totting toothless guy. Several turns and a bubbling radiator later, we got out and hiked. There was a fire pit; two old used condoms and a great vista, but no track.

We let the dog run into the tick-infested woods and I wondered why I follow this man anywhere.

As I clung to the handle of the car over the bumps and sharp edges of the track, I asked my self:

Why do people set out 15 signs directing you to a house for a sale, only to have the owner point a gun and have dogs charge with canines displayed?

Why does the plumbing always break on a Sunday when its time and a half?

Why when a computer/I Phone is crashing, it shows the manufactures logo? (Shouldn’t they be showing the competition in a crash?)

Why do they never have “full bars” when you really need them?

Why do dogs roll in any rotting shit pile of decaying animal?

Why do people only invite you to come and party with them only after they have been drinking?

Why do contractors always take three times longer and five times more expensive then they proposed?

Why do tourists wonder aimlessly thru strange beach streets?

Why do you have to go Start to turn off the computer?

Sorry, I’m dirty (leaning on seasoned) and angry. My house is still unfinished, filled with boxes, half-painted walls, no hot water, and no end in sight. The cash flow is killing me! 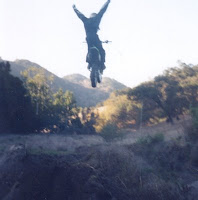