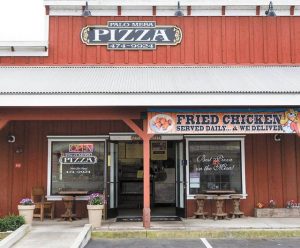 Palo Mesa Pizza is a little chain of bistros with a big buzz around them. I went for the fried chicken; I stayed for the award winning pizza. But the chicken was fantastic and a nice surprise.  The first location is right across from sister restaurant, Tanner Jacks up on the Mesa.  The locals had been raving to me about their food, so I drove up the hill to try it out. The eight-piece meal was enough for four of us, but we also tried a couple meatball sandwiches with hand rolled meatballs, a tomato meat sauce and mozzarella all on a tasty house made French bun. We took the food to go, as the restaurant was too small to accommodate our noisy group. The food made perfect picnic fair with the drinks secured from JJ’s Market.
Michael Stevens started Palo Mesa Pizza in 2007. Stevens is a celebrated chef that is known in the industry for his creative side. Motivated by his many awards and awesome reviews, Michael decided to open Palo Mesa Pizza and bring great pizza to the people of the Central Coast. Today Palo Mesa Pizza (in the Craig Center next to Tanner Jacks) is known throughout the area as the provider of the best darn pizza around (some even call it Happy Pizza). He opened his second location in The Albertsons/Office Max center earlier this year and we were excited to have a pizza out in our side of the boonies.
We ordered up a feast for family night to be delivered. Starting with spicy boneless wings with a ranch dipping sauce. These wonders suited everyone, not to spicy but with a horde of zest. Gary got the cinnamon bread as his starter, with swirly cinnamon and sugar surging thru the bread. He swore he would make the world’s best French toast out of the leftovers for breakfast. My daughter ordered the Greek salad with black olives, salami, tomato, onion, banana pepper and feta cheeses. She enjoyed the fresh components and scrumptious dressing. For the boys we got extra pepperoni, as this was the best pepperoni I have had from a pizza parlor with large but sliced super thin slices of delectable pepperoni. All pizzas start with the house made recipes of hand tossed dough and gourmet pizza sauces that range from traditional tomato, ranch, buffalo and Thai peanut sauce. 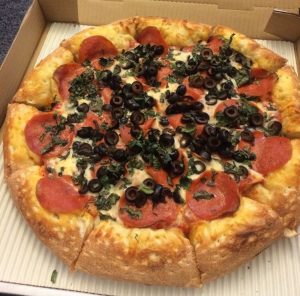 We shared the award wining pizzas that score at the International Pizza Expo in Las Vegas competition. The Greek had homemade Italian sausage, red onion, tomatoes, black olives, feta cheese, banana peppers and a sprinkle of oregano. This was a crowed pleaser.  The International Pizza Challenge pits up to 60 chefs against each other in the Traditional and Non-Traditional divisions of pizza creation. Palo Mesa pizza took first place in the competition’s Southwest Region Division of the United States. His creation finished in fifth place overall, although another pie took the coveted “Best Pizza in the World” title.
When I was home sick with everyone out of town, I had them deliver me a pizza that was not only enchanting, but would cure my cold.  The California Chicken Pizza has cubes of chicken breast, bacon bits, garlic and mushrooms all with a ranch dressing for the sauce. I had them add extra garlic to wash away my germs. And I love that they will deliver anywhere- even to the beach for just $4.00.

The best deal is the Palo Pack with a two topping large pizza with cheese bread and a soda at $20.00. We ordered this and snuck into the apocalyptic movie rationalizing that the people watching this film wouldn’t mind the pepperoni smell. It was a fantastic meal in the dark at the back of the theater. (Note: the manager of the theater frowns on this behavior, so don’t tell him I suggested the idea).
Palo Mesa Pizza also makes fantastic appetizers, pasta, calzones, sandwiches and more. 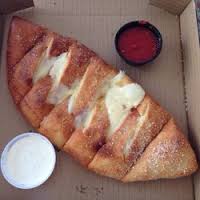