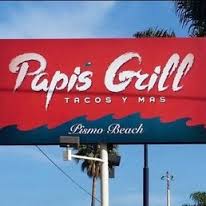 I long for those chefs that truly create, take something that is blank and turn it into art. The high is entertaining and everlasting, and it touches people. Thus they must continue. To experience the moment of creation, the inspiration of their souls reaching another’s. I am happy to say I found another brilliant chef running a “must try small find” in Pismo Beach.
When a new eatery pops up in town, I try to be there during the first week. I am forgiving for growing pains, but if this place is going to set the town on fire, I want to be the first one with the scoop. Opening day at Papi’s Grill in Pismo Beach, and I was in love with this new bistro. Rosendo Perez took over the former Garland’s (aka Longboards and Bullwinkles) and produced a taco stand that will redefine the term taqueria.

Rosendo comes via the executive chef track from Santa Barbara where he was a tappen chef for a sushi bar. He wanted to return to his wife’s hometown and mix his knowledge of Japanese flavors with the roots of his native Mexican food. I knew this was going to be a special place when Rosendo pulled out a ball of corn dough, hand shaped and fried my tortilla after I ordered. I nearly fainted, real Torillas del Mano is only something dreamed of North of the border. 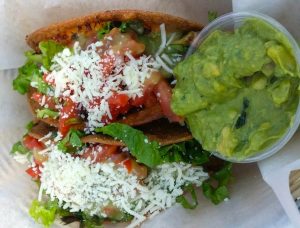 I started with Taco de Pescado, that featured fresh halibut caught daily from local waters that is cut and grilled, served with pico de gallo, cabbage and a special white sauce that like everything else, is made from scratch. A combo of traditional Mexican vegetables blended with a Japanese flavor palette to make a fish enhancing sauce that was perfection. The Taco do Camarones were equally good with large succulent shrimp cooked to impeccability. The corn salsa that accompanies most dishes was spectacular and I saw Rosendo roasting and cutting the corn himself.  With the traditional Mexican coke in a bottle and a Model Negro we moved on to the Potato Taco. These crispy little treasures are filled with potato, chorizo and a queso fresco combo then deep-fried and served with fresh guacamole (also made as ordered).

I became obsessed and ate here every day for a couple of weeks trying everything on the menu. Every dish was a spectacular as the next and my favorite was the Pasilla Grande. This dish that dances in my dreams contains a large roasted pasilla chile that is stuffed with cheese and chorizo.  It is served with two tortillas because of its size and I take a fork and knife to get every delicious morsel. A close second is the Veggie Taco (yes, the meat loving carnivore that I am, likes theses veggies that are seasoned and grilled to perfection) with a delectable horchata milkshake. 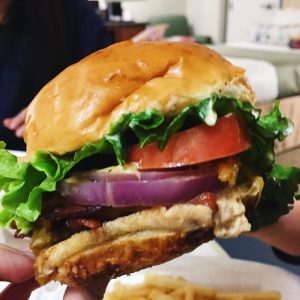 And not just a taco stand, Papi’s has fantastic hamburgers in addition to salads. We tried the Raja’s burger, a thick prime beef patty served with grilled pasilla chile with onion, tomato, lettuce, cheese and an amazing chipotle sauce.  This burger with a kick was served with a side of fries.
Rosendo makes Ceviche on the weekends with the freshest of fish and shrimp plucked straight from the ocean. He marinates it in fresh lemon juice and adds cilantro, onion, tomato and a hint of fire. It is served with tortilla chips. Papi’s Grill for was a gift to my mouth. Every taste bud thanked me for sharing.
Come and try what all the foodies are talking about at Papi’s Grill Tacos y mas. It is located at 1090 Price Street in Pismo Beach; you can reach them at 805-295-6660. They are open from 11:00am to 8:00pm daily.
Tags: Culinary Tourism