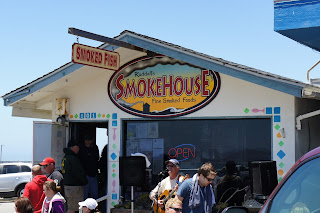 Walking up to the Old Cayucos pier I see a Jimmy Buffet look alike playing Cat Stevens in front of a small storefront with a line out the door. A variety of people stand in line, some newly peeled from their Mercedes, others with a layer of sand on their feet and all excided about trying the amazing surprises created by Ruddell’s Smokehouse.  I had heard for years about the place, but never found myself in the landfall of Captain Cass in the middle of the day. So I got in line and claimed a table on the sidewalk.

We looked at the restrained menu, order one of each and Gary went into the liquor store on the corner for a couple of Negro Modelo beers to wash down this smoked fish feast. The restaurant is economical in space and tariff with two guys constructing all the food and one taking orders and credit cards. While we waited for our tacos, I pursed the case options and planned my after meal purchases, as fish this freshly plucked from the sea and then expertly smoked was sure to fill up my fridge at home. 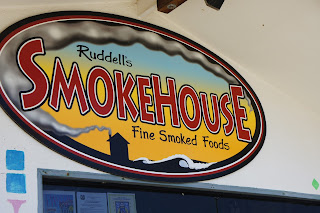 In the deli case was beautiful looking specimens all smoked. Salmon, Albacore, Ahi, Ono, Shrimp, Chicken, Pork Loin, Oysters and even Cheddar cheese was available in bulk. I have a deep adoration for smoked food, as I am sure it is in my DNA. Extending back before recorded history, smoking is one of the oldest known methods of preserving fish and other foods. Long before the existence of refrigeration, our ancestors learned to use a combination of salt and wood smoke, to keep fish and meats from spoiling. Although it’s no longer necessary the flavor it gives and the tenderizing effect is has on certain types of fish make it a delicacy.
At Ruddell’s you can buy the smoked delicacies to-go or in a taco, salad or sandwich. I did it all. We started with tacos. Salmon, Ahi, Albacore and Shrimp were served up in a warmed taco, but the ingredients were crisp and cold.  I started with the Salmon, as it is my crack. I eat smoked, raw or peppered salmon at least twice a week. This was served with a bit of spiced aioli, diced Fuji apples, cabbage, tomatoes and onions. The fresh, sweet, smoky flavor was jaw dropping and this could not be duplicated anywhere. I felt reverent in the presence of such culinary excellence and it was hard to let the husband try a bite. Next we tried the Albacore and it was bursting with the subtle flavor I come to crave with this fish.  It tasted like fresh sashimi with just a tad of smoke. Thinking it couldn’t get better we moved on to the Ahi. The fish was so sweet; I opened the taco and ate it all by itself. Thinking that the smoked shrimp would be the weak link, I saved it for last. But this blew my mind. It was perfectly cooked and then smoked and the flavor was that of ancient customs. Simply fantastic.  In every taco, the diced apples were a nice surprise, but you could also taste the love and devotion put into every ounce of this simple taco stand. I declare these the Best Fish Taco’s I have ever had.
I went back for five pounds of smoked fish and cheddar cheese and had a bacchanal impromptu dinner party for my friends that night. They all agreed we had found smoked fish nirvana. I loved eating right in front on the sidewalk with my paper bag laden beer, but it was even better at home with fine wines and tapas. If you don’t like the laid back location, take it to go and you will be just as happy eating it on the beach or at home.
I talked to owner, Jim Ruddell and he told me of his fascination by the process of smoked foods. With the help of his wife, Kathy, he spent time researching and tracking down the purest of ingredients for the seasoning in his recipes. They also visited as many smokehouse restaurants. Jim decided that the beach vibe of Cayucos was the perfect spot, primarily because he had ready access to an abundance of fresh fish. As word spread about his talent, he became known locally as “Smoker” Jim. He has been perfecting his uniquely delicious smoked foods since 1980. The fish is straight from local docks, literally right off the boat.
People from all over the world come to try this amazing, yet simple food that is wakening everyone to the sublime smoked essences. You are lucky enough to live within driving distance of this gem, get up there this weekend and write and tell me I was right. Ruddell’s Smokehouse is located at 101 D Street in Cayucos, right across from the beach. They are open 7 days a week from 11:00am to 6:00pm or call them at 805.995.5028.
Tags: Culinary Tourism