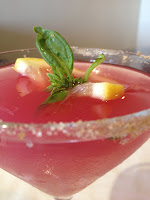 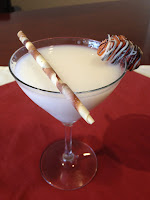 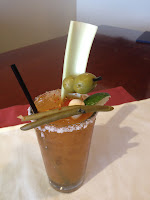 I do not see myself as a celebrity. I have never been hounded by paparazzi or given elaborate gift bags. Every now and then, I get the honor of being asked to be a judge for a food or drink contest. This one came from my friend, David Klein asking me to be one of the celebrity judges for this years “Rumble on The Rocks” Mixology Contest held at The Cliffs Resort in The Marisol Restaurant. I was flattered to be in the midst of such celebrities as Randol White of Eat, Drink, Explore, Gary Johnson of Southern Wine and Spirits and Patti Piburn of KCOY, (by default of an anticipated tie, my husband Gary Bayus of Prestige Business Sales, Mergers & Acquisitions). It was a lively group and we sacrificed our livers for this worthy cause. They asked us if we knew vodka, as Ketel One was sponsoring this event and much was on the line with the areas best bartenders competing and the profits going to SLO Special Olympics.

After sampling the amazing spread of food by the master chef’s of Marisol at The Cliffs the judges were swept away. Sequestered and unaware of which mixologist’s were presenting us with their unique libations, we began to taste each signature drink. Amazing ingredients followed including herbs, spices, fresh fruits, and vegetables all used to create one of a kind drinks. Think basil, cinnamon, jalapenos, and mangos and that is just for the presentation.

Our first drink was called Pickle Me Ginger and was a spicy combination of grapefruit and vodka with a spicy tail of ginger that lingered on your tongue. I was instantly a fan. The second was a Mexican Mojito with cilantro and jalapenos floating in the Ketel One haze. Our third was a white chocolate kiss with Godiva Chocolate, Crème de Cocoa, and Ketel One garnished with a candied orange striped with white and dark chocolate (this was Gary’s favorite).

Next, we tried the Rumble Punch, which was a fruity mix of Cointreau and then the Banana Strawberry delight with its frothy mist and bobbing fruits. Then came the Sweet Heirloom; a bloody Mary inspired drink using the pulp of garden-fresh tomatoes, jalapeno juice and garnished with a plethora of rockery bounties. It was spicy and delectable. The mango 1051 with a mixture of sweet mango and cracked pepper rocked my taste buds and delighted my pleasure centers.

We were to judge on taste, creativity, and presentation. This job was taken seriously, as we disregarded our livers and tried more of each drink as the deliberations for the winner became lively and passionate.

Later we learned that competing for the title Mixology Master were from Ciopinot Seafood Grill (Rob Horton), from The Cliffs Resort (Dylan Lammers and Egin Davis), from Rosa’s Ristorante Italiano (Stacey Giordanengo and Theo Sabatini), and from The Sea Venture Resort and Restaurant (Erin Harper and Brian O’Shea). These bartenders are the best in their field and they all created some amazing and memorable drinks.

The judges made the hard choice of first place that went to the Heirloom Blood Mary made by Dylan Lammers and Egin Davis. Peoples Choice went to Stacy Giordanengo of Rosa’s for her Pickle Me Ginger. Big adult fun time was had by all and The Cliff’s Resort renewed its license for coolest place to party for a long time.