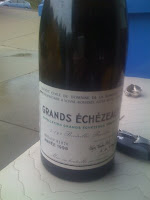 Remember back in the 80’s when you were at a party and a buzz would go thru the room? People whispering to each other and then disappearing. This usually meant that someone had cocaine, if you could get a secret nod, you too could embark on the white power smart-fest. Now when a buzz like that goes through a room, it means someone has brought a VERY expensive bottle of wine, wants to impress and share but there is not enough for everyone. I want to be on that short list, but I don’t posses enough clout. Being a red head gets me some leeway in the “ballzy” category and people are not surprised when I wriggle my way into a situation I have not been invited too.

I followed the buzz to the garage, where there were 5 men, sitting in a Rolls Royce. Only the drivers door was open and I was not sure what they were all doing smooched in this elegant auto. “CDR” was the whisper I heard and had no idea what that meant. So I bullied my way into the car (I think they let me in so they wouldn’t seem gay being that it was all men in a small space). Once inside I experienced the supple leather of the Rolls, the amazing elegance of this hand made machine, that still sported an 8-track, but Boz Skaggs never sounded this good.

What they were hiding and doing in their “fort” was drinking a bottle of wine. A $700.00 bottle of wine. The main wine guy tried to explain to me what it was, but comments like French AOC and such bounced off my non-wine educated brain. He let me try a sip of the miraculous nectar. It was okay. Not as good as the hosts wine. I was an idiot and said this out loud. I was instantly kicked out of the Rolls and sworn to secrecy.

I had spoiled their party and they all tumbled out except one gentleman who couldn’t get his door to open. He hollered for help and I offered my assistance. The cover of the Rolls had been shut in the door, and it would not open. His only way out was to crawl to the other side. But first, he had to hand me the wine bottle. This he didn’t want to do. I was a stranger to him and could go running down the block swirling his treasure. I assured him not a drop would touch my lips. He released it slowly like it was his last drop of water in the desert. I set down the wine bottle and helped him shimmy out of the shining sedan. He dropped on to the garage floor like a stone. Half drunk and giggling like a school girl. For my part in the rescue, I was offered a sip of the illusive wine, I declined as was happy with the pinot that had rocked my core.

The party had settled around the bottle of CDR and all talked in hushed tones as if in the presence of a God. It was just how I remember the coke in the 80’s. I was thrown out of everyone of those parties too, because inevitably I would giggle and blow half the blow on to the avocado green carpet. Cool is just not one of my virtues.

Why you should never let a dog lick your face