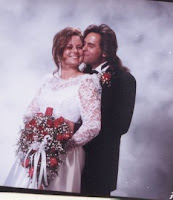 My husband and I were married at lunch. In the middle of a fight.
We were screaming at each other over important issues like trash receptacles and toothbrush caps and it had been going on for three days.
I had spent the night at my sisters, avoiding killing him. He came into my work the next day with flowers and an apology via Hallmark. I told him that it was nice, but we had to figure out why were fighting so much and we would talk about it after work. He started screaming, said he was leaving me and stomped out.

I was confused, devastated and pissed. I ran out of my office teary-eyed and drove to his business. I slammed in the door and started yelling and throwing trophy’s at him. His mechanics hid in the back.
As I threw a trophy at him. He ducked, put his hands on his hips and declared, “I want you to marry me”.
I screamed, “That’s no way to win a fight!”
“I’m serious.” Cowering in the corner.
“You’re nuts.” I threw another trophy at his head.
“I want to get married and I want to do it now!” I stopped throwing.
He tucked his hands under his armpits and flapped around like a chicken.
“What are you, afraid? Chicken, buck, buck, buck? Don’t you love me? Buck, buck, buck.”
“Fine,” I screeched. “Let’s go get married.”
Since we lived in Nevada, this proposal was entirely possible. We jumped in the car, slammed the doors and drove to the courthouse. He threw his drivers license at the clerk and asked how much to get married. $30.00 later I thought it was just a license and at any time he would end this charade and say never mind.
We got the license in 15 minutes and scooted over to a tacky chapel across the street. My soon-to-be husband marched in and announced to a balding Elvis that he was going to marry us, “How much to marry us right now?”
“30 Bucks, Dude.”
I grabbed his arm and took him outside. I explained to him that I was not going to get married again unless it was forever and we needed to talk about this (since in three years together, it had never come up). He said that we needed to do it now, before we chickened out and that our lives would always be intertwined and our love unstoppable. I was awed, but not convinced. He started flapping his arms and bucking like a chicken again. I yelled, “Fuck it, lets get this done, I have to go back to work.”

The ceremony took 5 minutes and we did not have a ring so we used a twist tie from the rolled up marriage certificate. They snapped a Polaroid of us and we look astonished and trampled.

One the way back, we stopped at a sleazy hotel (Fantasy Inn) that featured theme rooms. We had $25.00 between us, but told the clerk the story and she took pity on us and gave us the Cave Room. We consummated the marriage and returned to work. Stunned I sat at my desk. My secretary came in and asked me what I did for lunch. I told her she wouldn’t believe me.

We got home that night and told the kids we got married, but they refused to hear it and we set a date for a month later. After putting the kids to bed that night, we snuck out of our own house and back to the Cave Room. My best friend had decorated the bed with champagne and letters I wrote to her swearing I would never marry this man. We snuck back in the house the next morning and got the kids ready for school.

My assistant had Cerebral Palsy and felt she would never be married, so she asked to plan the entire event, I happily handed it over to her. She picked out everything and did most of it for trade for advertising. We were married at the MGM because I wanted to be photographed on the Grand Staircase, the one from Gone With The Wind. We had dinner at the top of the Hilton, Gary made everyone order desert first. Then the whole wedding party went to see Legends in Concert where the Madonna look-a-like took Gary up on stage and molested him. The evening ended at 5:00 AM with me dancing on a bar at a dingy bar to the sound track of Grease. They had never had a bride dance on the bar and it sounded like a good idea at the time. Luckily, someone had film left. All these years later, we are the happiest couple in the world.