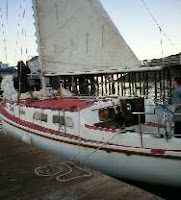 We spent that last year refurbishing our sailboat at 33 foot Yorktown sloop. Her name was Options. We did most the work ourselves and put our life savings into the project. I placed it on Craig list today for free.

First, a brief history. We bought the boat after drinking a bottle of Patron at the seaside sailors bar. A surfer who lived aboard her, was leaving for six months on a surf trip to Bali. He complained he only had $50.00 in his pocket and no idea what to do with the boat. My husband, Gary, told him how much HE had in his pocket and we stumbled to the end of the pier, took a wet ride and viewed her in the dark.

We were so excited, our floating palace in the ocean where we could hide from the kids and chill. She was an old sloop, and a surfer had called her home for over two years, so we scrubbed and cleaned. Although the intent was to relax, Gary saw her as nothing more than a huge “to do” list, a whole in the water where we threw money.

For four years we worked and argued about every aspect of the boat. I had no problem drinking myself into a coma and reading Twain, but Gary felt the pressure to make her “right”. When a vessel resides in the ocean, she is never right.

After battling seagull shit, hawks, seals, pirates, sacrificial anodes, and a laundry list of things we fixed, broke, replaced and ignored, we pulled her out of the water to completely refurbish her. The hope was that my husband would finally relax and enjoy Sailing……

Two years and every ounce of our savings went into to making her perfect. We spent every weekend, sanding, painting, replacing and arguing. We never argue in daily life, but something about this vessel, made us disagree on EVERYTHING. With literally every aspect of her new, but her name, we put Options back in the water.

Each year around this time a bunch of seals, come to Avila harbor to feed. Usually they are taken care of by the natural food chain and the sharks eat them. The sharks are not here for some reason. Seems the seals have a better PR campaign then the sharks. The Sharks are being used for McFish sandwiches. 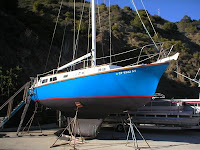 and the tourist loved to see them frolic about. When we needed fresh water or electricity, we moved the sailboat there and have to frighten the seals off the dock. They don’t scare easily and usually poking was necessary which caused the tourist to complain about the cute little seals being harmed by big mean sailors. Harbor patrol put a fence around the working dock, thus giving us a reprieve from seal feces every time we needed water.

My two favorite stories of the working dock happened on our first trip there. It is terrifying to sail a 33-foot vessel and bring it to a halt against a wooden platform in the middle of the rocking ocean. I would make my husband drive, and as he approached, my job would be to jump off the bow and scare the seals away so I could use the cleats to tie up the boat. First time, I jumped off on to a 3-foot round pile of seal shit. The line got into the poop also, so after I secured the boat, I was covered in seal feces. The seals kept jumping onto the dock, no matter how many times you poke them. It took two bottles of Antibacterial soap to get the smell off my body.

While I was taking an outdoor shower, another boat pulled up on the other side and a dog (terrier) came leaping off the boat barking and going after the seals. The dog latched on to one of the seals back flippers. The seal squawked and plunged into the ocean. We watched in horror as the minutes ticked off and finally the little dog popped up and swam to the dock. He was in shock, but fine and never barked at a seal again.

The harbor gave the seals an old working dock, but they are ignoring it and choosing to take over the sailboats. On Monday morning, around 6 AM, the Harbor patrol called and told us there was 20-30 seals on our boat and it was going to sink. He had scared them off, but they just got right back on. We had an hour to get to the boat and fix our seal problem. They had already sunk six boats in the harbor.

We grabbed our dingy and went out to sea to save our sailboat. We brought an unsuspecting friend who thought that a day on the ocean might be more fun than work. As we approached the boat, 20 seals greeted us. Our job was to get them off one at a time, because if they all went at once, the boat would tip and sink. We poked with broom handles and made big noises. They were not frightened or even inconvenienced. Finally, the slingshot Gary has been dying to use came in handy and we pinged them off one at a time. As I grabbed the side of my boat to come on board, I placed it in a 4-inch deep pile of seal shit. Our friend was ready to leave then.

Harbor patrol gave us the run down. We had to clean all evidence of the seals off the boat, move it to another mooring, and put construction fencing around it to keep them off. Meanwhile, keep them from coming on board and eating us. He expalined that this is not a job for harbor patrol to do.

The only way to keep them off is to wash off all their smell (a snot like substance that went 4-feet up my mast and covered my boom), hair (who knew seals had hair?), and mountains of seal dodo. To clean, we had to dunk a bucket into the ocean that is tied to a rope, pull up the heavy ass water around 12 feet, then spread it around with brooms. All the while, the boat is rocking in the ocean. We did this around 500 times.

We were advised we should round up all the seal hair (that is a fine small hair that attaches to everything) and shit. Then we were to take it to the seal dock. This was to try persuading them to sleep, fight, defecate, and make baby seals there. The hair stuck in every crevice and did not come off easily, if at all.

After the first round of cleaning, we had to move the boat to another mooring (at a cost of $16 per day) because even clean they would get back on it, and then surround it in construction fencing.

Harbor patrol has a great little pamphlet on how to get and keep seals off your boat, it is mostly bullshit. The gory details are that my boat was completely ruined with seal shit (imagine rotten fish in a broth of baby puke)and seal hair. They broke all our stainless steel rails and cables and most of our rigging. One was kind enough to projectile shit into my bathroom thru a broken window (which he did with his flipper).

The only way to get the seal smell and shit off the boat is with bleach, which is illegal, so we had to hide the 20 bottles of bleach we used. It burned holes in the top or our feet and I am sure Gary and I will not have finger prints for a while.

After 6 hours of moving around bleach and seal shit (and did I mention the hair?) we tried to move the boat to the working dock to spray her down with fresh water. Half way there, our motor quit (here’s the funny part) as it was clogged with seal shit. As we drifted thru the harbor, dinging off other boats because our sails were stowed and the anchor was not attached. We speared the bow sprite of a fishing boat, tangling our new mast and rigging with his boat. Lots of screaming and cussing occurred. At this point my husband quit, gave me the boat and began to pout.

The Sea Taxi came and towed us to the guest mooring; where we spent four more hours hauling seawater up with a bucket and killed an entire reef with bleach (don’t tell anyone). We put the orange construction fencing around our boat, a very attractive look, which means it is unusable until the seals leave, no date yet on when that will happen. Then we watched the seals climb aboard a million dollar yacht and destroy it.

The smell was so bad; we had to throw away everything we were wearing. Even the shoes.

I had dreams of clubbing seals all night. My husband still won’t talk to me, even after I serviced him in the shower. We had to take three showers to feel clean and now all I smell is bleach.

Harbor patrol are doing everything they can, we just need a seal-hunting season. I didn’t get pictures, but should have. The best part is during all this, my producer from Hollywood called me, and I couldn’t take the call or my IPhone would always smell like seal shit. Yes, this is my life.

Human resources at its finest!

Pain, Pain, Pain (Caveat- this post is for women)