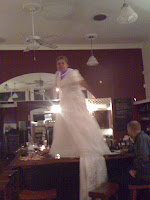 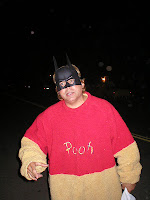 We are moving on to deliberate infinitesimal character traits to make them 3D fully flushed person. This is where it gets fun, as you can already see the character and it is time to fill in the blanks with spackle. Most of these items will not come up in your story, but when they do you will be pleased to know the immediate answer. This last layer is the most important as it really separates the wheat from the chafe. 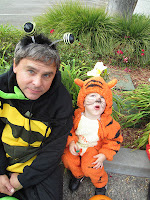 Please answer every question like it is mandatory. Example- Halloween is mandatory at our house, even though the kids are grown and we are on to grandkids. My husband finds a costume and goes trick or treating with or without children in tow. He carries the requisite pillowcase as a candy receptacle and runs from house to house. In the last five years he has been a Bride, Batman, Winnie the Pooh, a Bumblebee and Catwoman. This makes his character distinct (and a bit odd) because he is customarily a suit and tie guy. Our neighbors and friends find this behavior hysterical and look forward to each year’s costume.
Have fun and finish up, then start on your other main characters.
Dislikes/Likes/Details
·       Controversial/traditional/liberal or something else
·       Which figure in history do they most admire?
·       Wine, beer or hard alcohol? Which do they prefer?
·       Alcoholic or drug user? Son or daughter of one?
·       What would he be for Halloween?
·       What would he want on is tombstone?
·       Loner or family orientated?
·       Favorite music or TV shows?
·       Which photo in family album captures him best?
·       How much would it take for him to do something seemingly contradictorily or out of character?
·       How would he react to the following:
1.     Inherited a million dollars
2.     Bankruptcy
3.     The death of a loved one
4.     Two weeks on a Greek Island
5.     Flat tire
6.     A natural disaster
7.     An improbable act of kindness from a stranger
8.     Being fired
9.     Losing everything
10.  Meeting an old friend that they haven’t seen in years.
11.  A blind date
12.  Being raped or murdered
13.  An unexpected consideration or gift
14.  Serious illness
15.  An unexpected day off
16.  An interracial relationship
17.  Being rescued
18.  15 Minutes on local TV
(The entire Character lesson plan will be available after for one complete download and I do teach this 4-hour class live in person. Email for the entire Character Lesson or to find out about up coming classes).

Why you should never let a dog lick your face