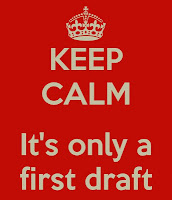 This is a deceptive phrase as it leads you to believe you are done writing. Nay, Dear Scribe, this is just a starting point. Although this is the first time you pull your story together placing 50,000 words in order, there is nothing final about a First Draft.  That is to say, enjoy this time creating. When you are done the left-brain will take over and edit. Edit and rewrite until you want to throw the story away like a teen smoking pot in your den.

Let us focus of the process. You have done all the work creating the structure of your story (summary, plot, outline, character) now it is time to put up the walls and see what this castle in your imagination looks like.  It is a pleasurable and exciting journey as the story drags you along as fast as your fingers can type (or scribble if you are a pad and pen writer). This is the longest part of the process, but one filled with a creative discovery that will thrill you.
Like I advised before, write every day at the same time for a determined amount of time. Leave when the time is up, even if you are mid sentence. I like to daydream about the story all day long, letting different scenarios germinate and grow (or disgust and humor me). The most important thing to remember in this process is to try NOT to be perfect. In fact try to be imperfect as much as you can.
When I read Stephen King’s On Writing- he was the only real novelist at the time making a living writing books, so I took his counsel seriously. He discusses at length about the imperfect First Draft and the magic of letting the work not rely on flawlessness. Then he shares a First Draft of his work (that was already a popular novel) and I was delighted to read it was pure drivel! You could see the nuggets of genius that survived the cuts and edits, but in between was word mud. I felt for the first time freed from my perfectionist brain and that is when my writing genuinely took off.

When I write a 1000 word column, the First Draft typically is 3000-4000 words. I type, pontificate, use the thesaurus like a sacred book and literally play narrative scrabble with my First Draft. Then I edit, looking first for ramblings (which I excel at), points that go nowhere and engage the grammar police. That will cut it down to 2000 words. Then the hardest work begins, cutting the Darlings. All those big words that you thought made you sound so smart, now just look like I crawled into a virtual thesaurus. Some of the words actually work, but if I love it so much it makes me squeal with glee when I read it, that is my first cut. Then I cut my favorite paragraph. I know this sounds crazy, but it really does make your writing much stronger and poignant. If I doubt the cutting of them, I use this test. I throw the sentence up as a Facebook post. I am sure each one will weigh down my page with multiple up turned thumbs “Like” –ing my prose. But that NEVER happens. It is always crickets and then I know I was right to make the cut. I still save it in my “Darlings” file, because it is fantastic and I am sure I will use it later (never happens). I had one Darling about my dog chasing the shadows of butterflies while the actual meaty morsel flapped above his head as he chomped at the pavement. I was sure would be the first paragraph to win a Nobel Peace Price. I copied and pasted that story into hundreds of projects and then cut it out. I finally found a story it would take wings in, only to have my editor ask me not so politely to cut the absurd thing out.

Select a random topic, like the African Bush or Dolphins or Godzilla and look it up on as many reference sites as you can find. Dictionary.com, thesaurus.com, Wikipedia.org and about.com are some research sites to begin.  Write an essay on what you just learned. When you are done with at least 500 words, edit the piece in half. Take out ½ of the words to make a better story. The writing will be easy as you just learned a bunch of statistics and anecdotes, the editing not so much. Do it anyway and send me both the first draft and the last. Have fun!