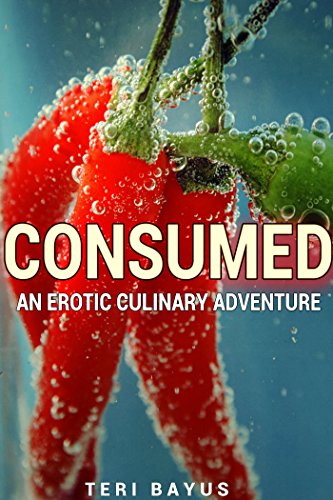 Consumed is RELEASED Ebook only and available
on Amazon at:
http://www.amzn.to/1jFEeQH
or on iTunes:
https://itunes.apple.com/us/book/consumed/id1059861011?mt=11

When Nadailia opens up her new farm-to-table bistro and hires Chef Dylan, she had no idea that she would be seduced not only by his food, but also ultimately lose herself in his hunger.

The wife of a cold billionaire has its challenges. Nadailia has created and succeeded in many restaurants financed by her husband’s money. She has never known real passion until the young chef Dylan comes into her world. Chef’s decency keeps them from realizing the true feelings they freely express to each other through word play and food. When her husband dies, it is time to see if this is real love or just lust.

Consumed – Sex and Food, Food and Sex – a Delectable Pairing!
By The Runaway Writer on October 11, 2015

I downloaded this book last night and I can’t stop reading. Food and sex, sex and food – I can’t decide which is more compelling, but woven together like this results in a delectable, explosive story and reading experience! Wow. Throw in a smart, strong woman lead, who takes just what she wants and the story grabs you and doesn’t let go. I laughed so hard at the “embryonic eater”! I can hardly wait to finish my binge.

Consumed is erotica that turns up the heat and touches …
By Evilbendy on October 11, 2015

Consumed is erotica that turns up the heat and touches all the senses. Food and sex are basic needs, but damn this book lifts them to a higher level. Teri Bayus is on to something with culinary erotica. A strong female lead character who kicks ass in business and in the bedroom. Forget Netflix and Chill, it’s Consumed and Chill in my house.

A Culinary Sexfest
By Janice Konstantinidis on October 11, 2015

Anyone who doesn’t read this book will go hungry! ‘Consumed’ is a multi-layered delight to the senses. If it can be cooked, or not, it’s in this book. Whatever you’re doing in the bedroom or elsewhere, stop and read Teri Bayus’ romp in erotica. It’s a culinary sexfest that just might lead you to experience the spice of your life. I have never read anything quite like it. A modern day Karma Sutra with attitude, chilli and herbs.