There is a preconception that food that is good for you lacks flavor. That is rarely true, but in the hands of a masterful chef, even the healthiest meal can become a symphony of flavor and texture. I was excited to try and new concept in nourishing cuisine at Oki Momo Asian Grill. They opened and I was there the second day. With a clean esthetic and the promise of gluten free, vegan and vegetarian this wholesome food turned out to be some of the best casual dinning I have had in this area.  Jon Yeh greeted us at the cash register as we grilled him on the menu and what to try.  What was immediately impressive is that they make everything in house. I ask about the concept and he told us his wife is a vegetarian so eating out was always a challenge for their family. If it was a “health food” restaurant, it was usually lacking in flavor. She had a difficult time finding anything to suit her appetite at regular restaurants. They decided to join forces with an old college pal, Chef In Lloyd and create a flavor filled menu that satisfied everyone’s palate. 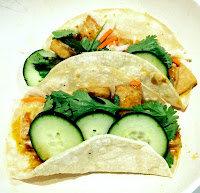 Oki Momo, Japanese for “large peach,” is named for its signature momo sauce, which includes peaches. Even the plates and cups were sustainable all made from pressed bamboo.  Jon told us about his late nights of making the dessert Mochi. Gary ordered three to start.  These rice flour and cornstarch pillows filled with mango, chocolate and strawberry ice cream were exceptional.  Gary inhaled them and ordered more.
The menu includes dishes with Korean, Chinese, Japanese, Thai and Vietnamese influences. Single item are $5, with two and three combo options priced at $9.50 and $13.50. I ordered the Teriyaki chicken; Thai chopped salad and a bowl of Pho. The Tolosa Sauvignon Blanc paired perfectly with the light Asian flavors.
The Teriyaki chicken was cut into small moist chunks and cooked perfectly.  It was seared on the flat iron grill with baby Portobello and shiitake mushrooms, and glazed with house made teriyaki sauce. It was exceptionally moist and the teriyaki delectable with the mushrooms, a savory sweet combination. I love the open kitchen and watching the dance of the chefs as they prepared each item. 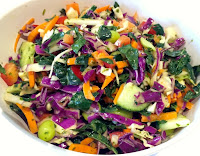 The Veggie Chop Salad instantly became my favorite. With a perfect blend of cabbage, kale, cucumber, carrots, red pepper, and edamame tossed in a Thai peanut, lime and cilantro dressing. It was hearty and refreshing. I ordered another to go for lunch the next day.
Then the magic happened. They brought me a bowl of Pho. If you have not discovered this enchanted street food from Vietnam, you should. It is comfort in a bowl. It sustains and cheers you. I travel to San Francisco for a bowl of this delight, but now (for the first time) it is done correctly in San Luis Obispo.
Pho (pronounced FA) is a slow cooked beef bone broth infused with an aromatic blend of herbs and spices and served with rice noodles, bean sprouts, Thai basil, and cilantro. At its most basic, pho is Vietnamese noodle soup that’s typically made with beef stock, herbs and spices and simmered for several hours. Pho is served with rice noodles and various cuts of beef (Pho Tai). The noodles come out still cooking in the bowl, which gives you time to dress up your Pho by adding Sriracha or hoisin sauce. This is a dish that is served primarily at breakfast time in Vietnam and remains a staple of the early-rising Vietnamese population. Pho is like cereal, oatmeal or scrambled eggs. It’s how you start the day. This bowl took me instantly back to south east Asia and Chef In came to check on us. I gushed on about Pho done right and he smile with pride. 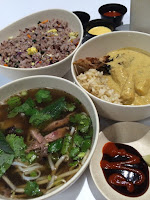 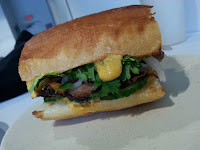 The next visit (two days later) we sat on the bright and clean patio. Gary dived into the Momo bar that looked dense, but was full of flavor. Then he had the Lemon Bar that was an impeccable combination of tart and sweet. 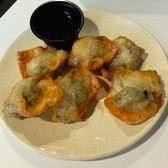 I started with the Pork/Shrimp Wontons that were lightly fried. They were handmade wontons filled with minced pork and shrimp, baby bok choy, water chestnuts, and onion, served with our house made ginger soy dipping sauce. I loved this dim sum sample of an appetizer.  Next was the Purple Rice, a blend of long and short grain white rice and antioxidant-rich purple rice, seasoned and seared on the flatiron grill with kale, cabbage, carrots and egg. Purple rice done right is outstanding, and this one was flawless. 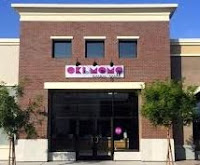 Then I tried the Korean BBQ chicken wings, and instantly decided I would not be sharing these dreamily done crunchy chicken wings tossed in Korean BBQ. You could also choose honey lemon-pepper or soy buffalo sauce. The Rice Noddle’s where subtle but when I added the Momo sauce and a bit of heat, I feel in love.  They were Fair-trade, organic brown rice noodles seared on our flatiron grill with kale, cabbage and carrot ribbons. Gary had the
Yellow Curry over white rice and loved the mild burn mid throat.
With the peach and the robot as cartoon character mascots, this new Asian Grill, Oki Momo is delectable as it is healthy. Find them at 2256 Broad Street, Suite 120 in San Luis Obispo (by Fresh and Easy). They are open everyday from 11:00am to 9:00pm; call them at (805) 439-4198.
Tags: Culinary Tourism