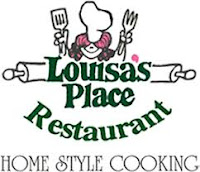 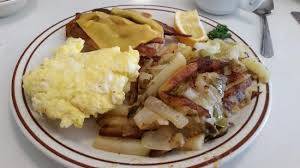 Breakfast is one of my favorite meals (especially when I don’t have to cook it). The comfort of the steaming coffee, the crispy toast and the camaraderie between diners only happens during the first part of the day. By lunch everyone is busy with lives and work, but in the morning people are still just greeting the day and each other. I also love old fashion diner’s especially those that are designed in a circle, so you can talk to everyone and not just bury your head in the paper and read the daily headlines.
During the holiday’s, I was the scullery maid for 12 and I needed a break. We took the whole crowd to a place known and awarded for their home cooking. Louisa’s Place Restaurant has been voted the best place to have breakfast in San Luis Obispo since 2007, but has been serving generations of customers as a Traditional Full Service Family Diner for over 30 years.

While the grownups lounged in their coffee haze, Grandpa (my husband) ordered a Banana Split with three scoops of Thrifty Ice cream covered in chocolate, strawberry and Carmel sauce resting on a luscious banana topped with whip cream and a cherry on top. The grandkids were duly impressed; their parents were horrified as the kids begged for the same. To make up for Grandpa’s display of sweet tooth, the kids ordered Pecan Waffles with pecans baked inside, a dollop of whip cream and he felt as “bad” as his Dude (that is what they call Grandpa). The other got the Chocolate Chip Pancakes with whipped cream, but also added on top fresh strawberries and blueberries, explaining that fruit was good for him.
The other men went traditional ordering the Ham Steak and Eggs with a huge ham steak, two poached eggs (that were perfectly cooked), savory home fries and a buttermilk biscuit. We also all tried a side of linguica and loved the spicy wonder of this Portuguese treat. Most of the group went with just eggs and bacon and everyone was delighted with their food and the huge portions.

I had the Eggplant Parmesan Omelet with thick sliced grilled eggplant, red onions, button mushrooms, and jack cheese. It was slathered in Louisa’s housemaid marinara sauce and topped with parmesan cheese. I really liked the textures and the flavors of this unusual omelet pairing. But my favorite was the Guacamole and Bacon Omelet. The bacon here is thick and cooked just right. The homemade guacamole with fresh roma tomatoes and jack cheese made this a real California treat. It was topped with sour cream and was an enormous serving. The rebel teen ordered the Breakfast Nachos with freshly made tortilla chips that are covered with scrambled eggs, diced ham, diced bacon, jack and cheddar cheeses, sour cream and salsa. Louisa’s salsa has won many awards (as have their burgers). An American version of Chiliquilias and it was yummy.

At Louisa’s Place they have all of your breakfast favorites ranging from thick sliced bacon and eggs with biscuits and gravy to over twenty different extraordinary omelets to pancakes, waffles, and french toast. They are proud to have been voted San Luis Obispo County’s “Best Breakfast” three years in a row. The friendly and helpful staff creates a welcoming and comfortable atmosphere for the whole family to enjoy.
In addition to “Best Salsa and “Best Burger,” Louisa’s serves award winning BBQ every Thursday night at San Luis Obispo’s downtown Farmer’s Market. 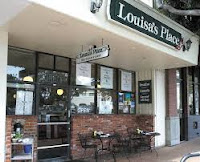 Truly a family restaurant, the restaurant was first opened here in 1958. Before being called Louisa’s Place, it was called the Best Ever Grill and later the Nibble Nook. Louise Webb bought, remodeled and gave her name to the diner in 1976. In 1991 Edward and Christy Sweeny became the new owners and it remains in the Sweeny family. Today, Scott and Kuuipo, with the help of their children (Tawni, Kaitlyn and Aric) proudly carry on the tradition. Everyone who enters becomes family and this dining establishment takes care of the community with generous donations to local charities in both the name of their founder, but also in the name of regular customers who have passed to the big diner in the sky. I adore their “Trust coffee” and water outside and the feeling of affection with every bite of toast.
Louisa’s is located at 964 Higuera Street in downtown San Luis Obispo or you can call ahead for takeout at (805) 541-0227. They are open for breakfast and lunch everyday from 6:00am to 3:00pm.